If you’re on Facebook, you have no doubt been served up a year-end video that wraps 2016 up in a tidy little animated package, complete with soundtrack. I have to admit I’m a sucker for an animated slide show that I didn’t have to assemble myself. It’s like having Ken Burns as your personal scrapbooker and archivist. When FB made a slideshow of photos and videos I took of my husband handing out tissues at the marathon, I couldn’t stop watching it. It was a genius piece of ironic conceptual art that completely captured his wacky personality and made me and everyone who knows him want to laugh and cry at the same time. How was it so possible for an app to do this? AI has arrived.

But now Facebook’s end-of-year video is sending me into an existential crisis and threatening to un-do years of therapy. Because I *only* liked 1727 things this year. 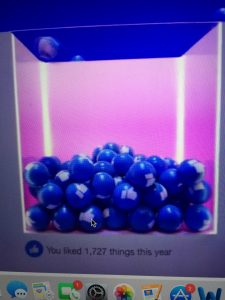 This sounds like a lot, right? I mean, that means I liked an average of 4.73 things a day, every day for a year. And that’s in a year that, on average, had a lot of unlikeable things happen – at least in my opinion. So this should seem heartening. Maybe things aren’t so bad. Maybe Facebook is like a gratitude generator making us step outside ourselves and like things. (This is ignoring that a lot of the things I liked were probably posts complaining about current affairs.)

Now, I am not at all surprised that Martha M. liked more things than I did. She is one of the most positive people I know, always quick with a compliment and a donation; an avid supporter of the arts and politically active. But are you seriously telling me she likes an average of 101.68 things per day? She is 20 times more positive than I am?

I was certain there was a clear mistake in the like-counter at Facebook.

But then other people started posting their like-numbers. Marian liked 18,078 things. An average 49.52 likes a day. And she’s pretty snarky. In fact a good portion of my sparing likes are probably bestowed on her posts about Sutton Foster’s outfits on ‘Younger.’

Could it be that I am a withholding like-r? And if so, what does it mean? Has Facebook stumbled upon a way to determine a positivity quotient? And mine is LOW? Could this be the reason for everything wrong in my life? How do I fix this? Maybe if I like more things on Facebook, I’ll finally sell that TV pilot or land that dream gig. Should I be giving the old thumbs up more generously to everything I read? I mean, I THOUGHT I pretty much clicked a thumbs up for most of my friends’ posts. Maybe I wasn’t on Facebook enough. Maybe I needed to devote more time to scrolling through my feed to like stuff. How many things could I like in a minute if I tried? I’d have to be careful about carpel tunnel, but I bet with minimal effort, I could add a zero to my like #. I mean, if rats in a cage can hit a lever….

And then it hit me. Mark Zuckerberg has built a giant Skinner box and we are all in it. Facebook is a giant behavioral economics experiment and we are being conditioned to like things. I am not the first to figure out that social media uses Skinnerian marketing to engage users. But seeing these numbers and the competitiveness it brought out really brought it home for me.

What is Facebook doing to us with this end of year tally? On the one hand, it points out how much time we must be spending in this Skinner box, and makes us vow to put “quit Facebook” on our 2017 resolution list. On the other hand, there’s nothing wrong with liking things.