Tired of no one listening to you opine about the changes going on in the neighborhood? Here’s a chance to be heard.

This weekend, my husband and I met filmmakers Jamie Courville and Chris Reynolds hanging out on the Carroll St. Bridge.  We got to talking and they told us about their documentary Gowanus Current,which is following the changes taking place in the neighborhood.

They are incorporating audio testimonials in the film and are eager for folks to call their hotline and leave their thoughts on Gowanus – anonymously, or not.

Check out their Facebook page for news from the neighborhood and updates on their film.

Here’s a reminder of how fast things are changing: Two Before/After shots they have collected for their project. By my recollection these were taken just a couple of months apart. 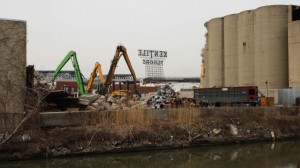 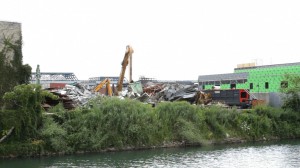 This post of Mapping Gowanus was created by Philip Goetz.

I pulled into the Find parking lot next to the bridge and when I got out of the car the first thing I saw was a broken sink and toilet against the bridge wall. Since the gate is close during the night, I have to assume this happened in daylight and it seemed deliberate. Like an art piece. Then, I noticed bugs flying around the thick brown bag and became aware of an incredible stench. My daughter Sasha was with me. We had to run from the smell. I became certain it was a piece of art.

I had taken documentary pictures as a test, and felt compelled that this would be more of a documentary piece. But after stumbling across the “bathroom sink and toilet piece” I decided this had to be an art piece. So I have begun “art-ing up” the photos.

These images were shot at dusk on this rainy summer’s eve. I went with more of a “cut-out” approach to stylizing them. Again the interesting image in the series is the one that is un-retouched, with the “Drawbridge” sign. After 3 years and millions of dollars of construction, the barely reopened train station overpass provides this subtle hint that your trip down ninth street might be delayed by the passing of a small boat coming into the canal to measure the toxicity of the Superfund site.

“As a result of years of discharges, storm water runoff, sewer outflows and industrial pollutants, the Gowanus Canal has become one of the nation’s most extensively contaminated water bodies. Contaminants include PCBs, coal tar wastes, heavy metals and volatile organics. The contamination poses a threat to the nearby residents who use the canal for fishing and recreation.”

The oil rainbow floats with the reflection of the cloudy dusky sky. They are married in the slowly drifting current. it makes one thirsty for a soda. The bottom image shows two light structures that float over Hamilton Avenue draw bridge. My neighbor won the commission for these structures he designed. His apartment overlooks them as they change with the season and react to the traffic.

I took pictures yesterday focusing on the bridge itself. I realized that in general, and especially with the construction that has surrounded it for the past 3 years, that there are very few perspectives where you can actually see the bridge. It hides, or lurks, under the looming subway overpass. The 9th street bridge, is ominous, but almost invisible from any form of daily view. It is the Big Secret. 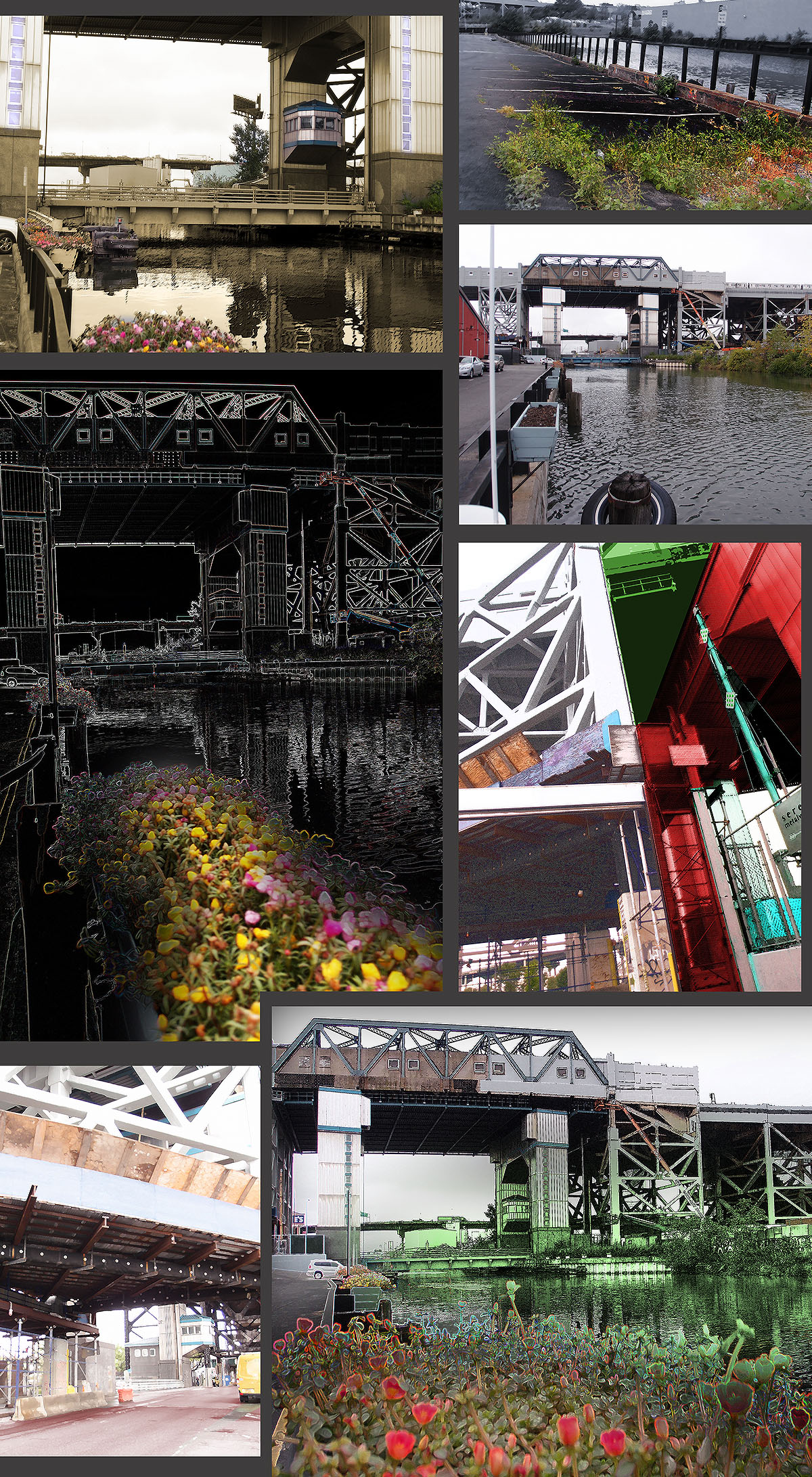 On the walk to the bridge I took a picture of grass in the parking lot, in a large hole created by the Sandy storm. With high tide cresting the barrier of the parking lot, I realized that this little garden is fed by the toxic water of the Gowanus. I walk with my two kids and dog along this path along the Gowanus all the time. I have used the ledge boarding the water to have difficult conversations with the people who work for me. I once was almost provoked to throw one of them into the water, an action that would have served as a double-edge sword for him. I knew this person for years, we were once close friends, and our relationship went sour in that conversation. We no longer speak.

This project at first seemed ominous. Despite my deep relationship (of over 30 years) with the location of the 9th street bridge that includes my home one block West and my office adjacent to the East, at first I couldn’t imagine what to do with it. Then I settled on still photograph, and realized it was difficult to frame. Then as I took the pictures it became easy. Like an intimate friend you finally had time to spend real quality time with.

In the coming months this bridge will likely be trafficked heavily by recent ex convicts, as the new headquarters for the regional federal parole office is being developed on the Gowanus, and the bridge will serve as one of the direct routes from the subway to the office. This situation may serve as the “last conversation” I have with this neighborhood, at least for my office.

In the end, thinking about what the Gowanus really is, outside of the scenic and unique characteristic of a flowing body of water, supporting tug boats, barges and social boating in the midst of a concrete jungle, I came to see it as the piranha it really is. It left me in a state of fear and anxiety. That’s Brooklyn for you I guess.