Today’s entry of Mapping Gowanus is from writer Tracy Young

GOWANUS. Say it. You gotta love that name. It sounds like a hard boiled Brooklynite in a ‘40s black and white. 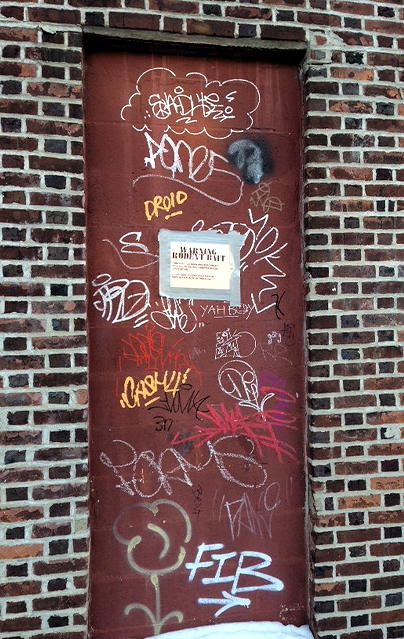 G is for GRAFFITI

I miss the stuff. It’s nice to see it in its natural habitat instead of reframed for the tourists. 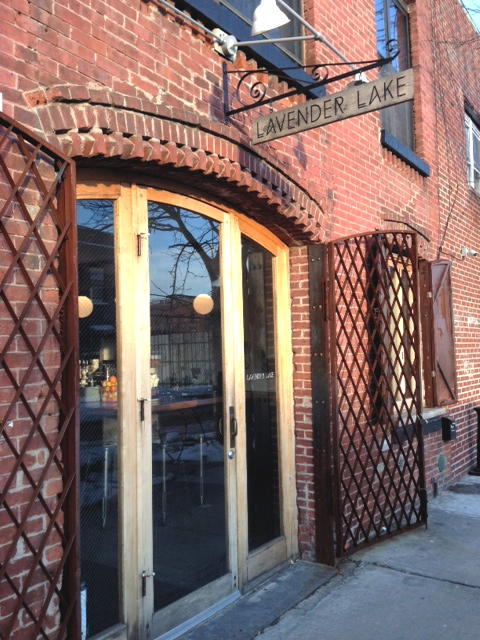 O is for OVER. Is there a worse omen than a restaurant with lavender in its name? 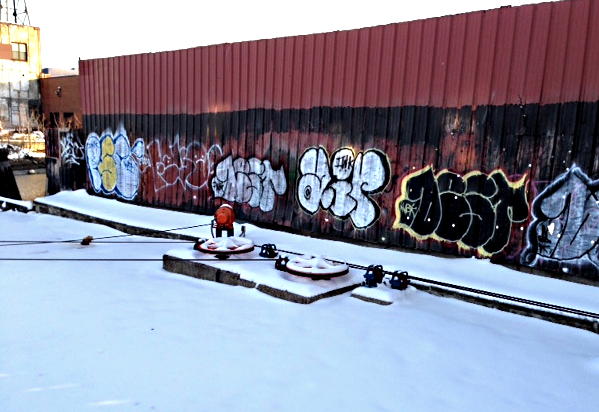 W is for WORKING CLASS, or at least a working canal. There is something romantic about a neighborhood with a canal, no matter how blighted. Insert joke about Park Slope dykes. 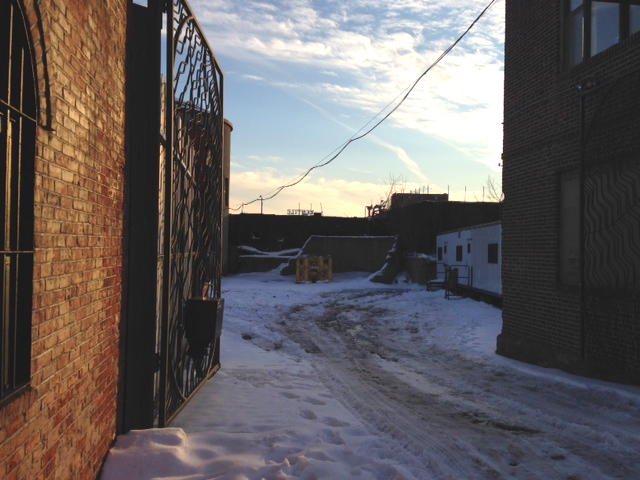 A is for AFTERNOON, the light, in winter, the opposite of the light in August. A cold day for exploring. 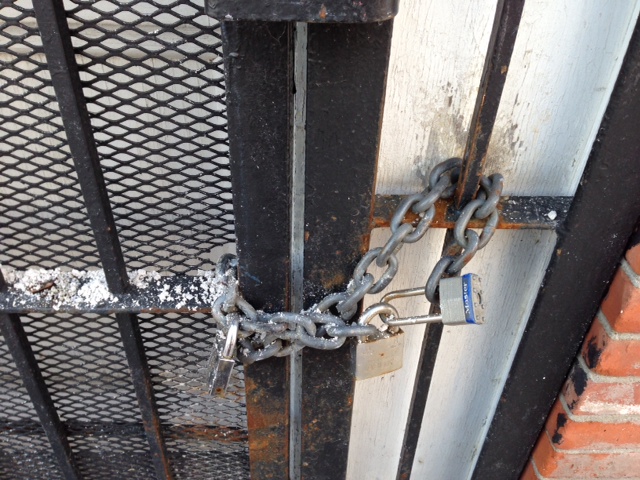 N is for NO PLACE FOR OLD (WO)MEN. Forget it. You complain about the Village, going the way of NYU students and bankers…but would you ever have the balls to be the oldest hippie in Brooklyn? 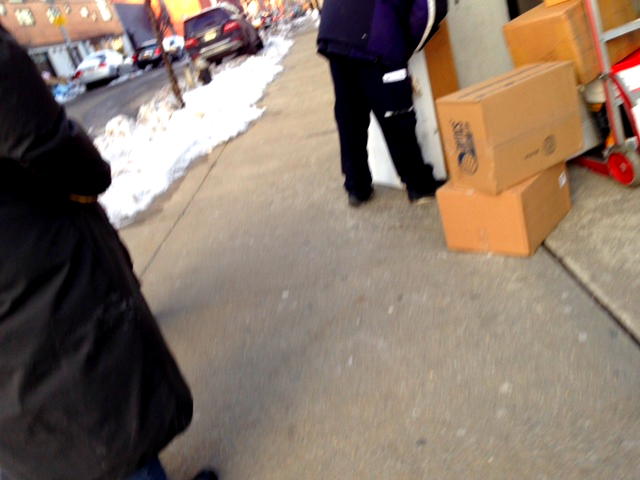 U is for UNPACKING. Or packing. Coming or going. Still, it would be kinda fun to start over. 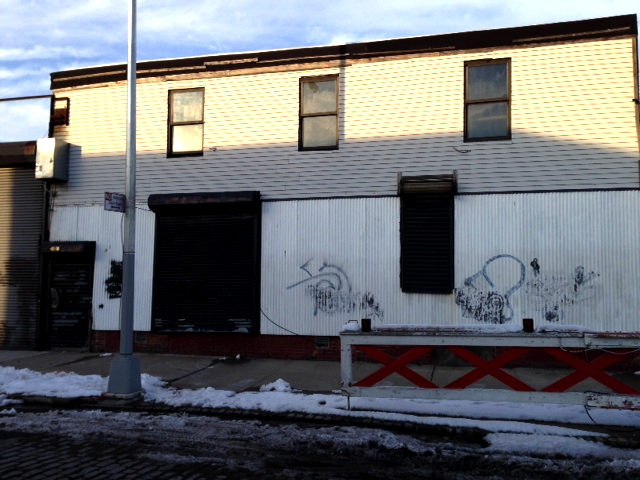 S is for SINGING. Weird Chinese music, pouring from a  cracked open window. This is the image  I’ll keep.

The latest entry for Mapping Gowanus is from writer Alison Humes.

The Cardiologists of Union Street

This block shows off its personality via three of its old-timey residents, for the sake of argument called Vern, Griswold, and Ruffy.  The buildings on the street where they operate are nondescript to the point of seeming opaque, even if one, which is painted all green, is called the Green Building (purportedly the setting for “events”). The signs speak exclusively to the cars, a clue to their importance*. Vern, Griswold, and Ruffy try to fly under the radar, what with their democratic and egalitarian snow costumes, but they can’t help but radiate their inner verve.  Moving east with the flow (of traffic), one sees Vern first, standing sentinel and wearing a special tree disguise, while quietly acknowledging an affiliation with Big Green on its cab door and indulgently ignoring the youngster across the street stopped exactly where instructed not to. 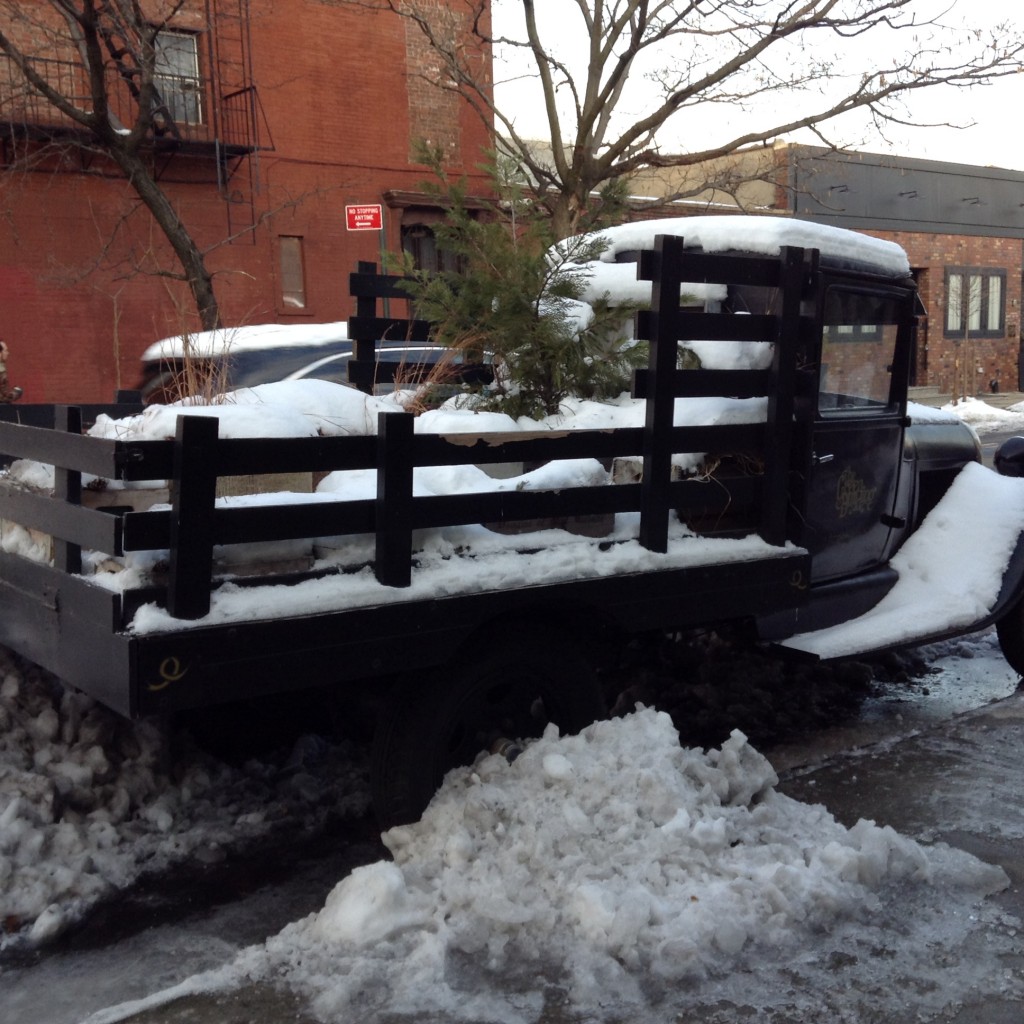 Haughty Griswold, the stuffiest of the Union St. denizens, likes to think of its style as “easy elegance”—neutrals, with the graphic allure of white walls, black undercarriage, and always gleaming chrome. Class means not calling too much attention to yourself while dominating the street anyway. 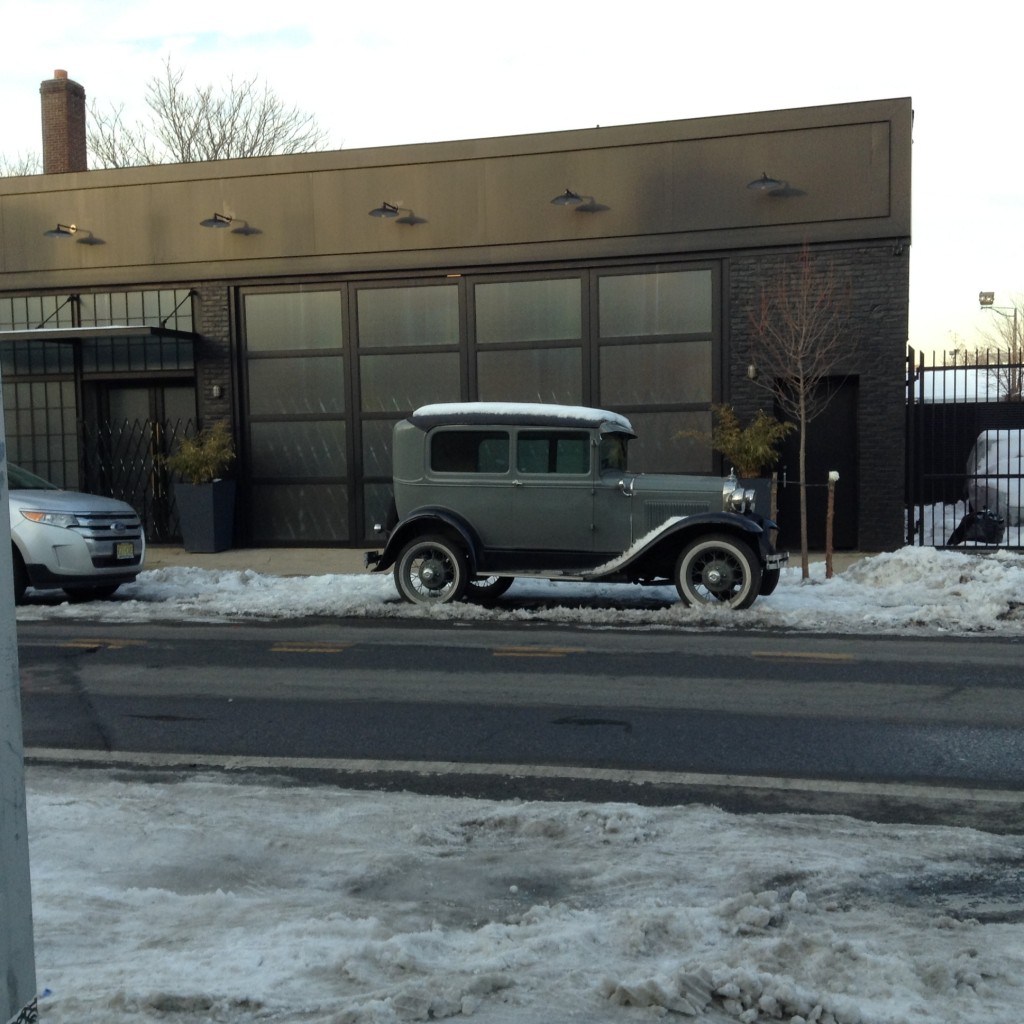 Even when a tacky “cab” tries to steal the limelight with a little flashy razzle-dazzle. 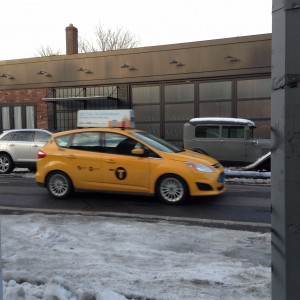 Finally, or last but not least, there’s Ruffy, who keeps an eye on the canal and doesn’t have time for the nonsense bullshit chatter of Vern and Griswold. 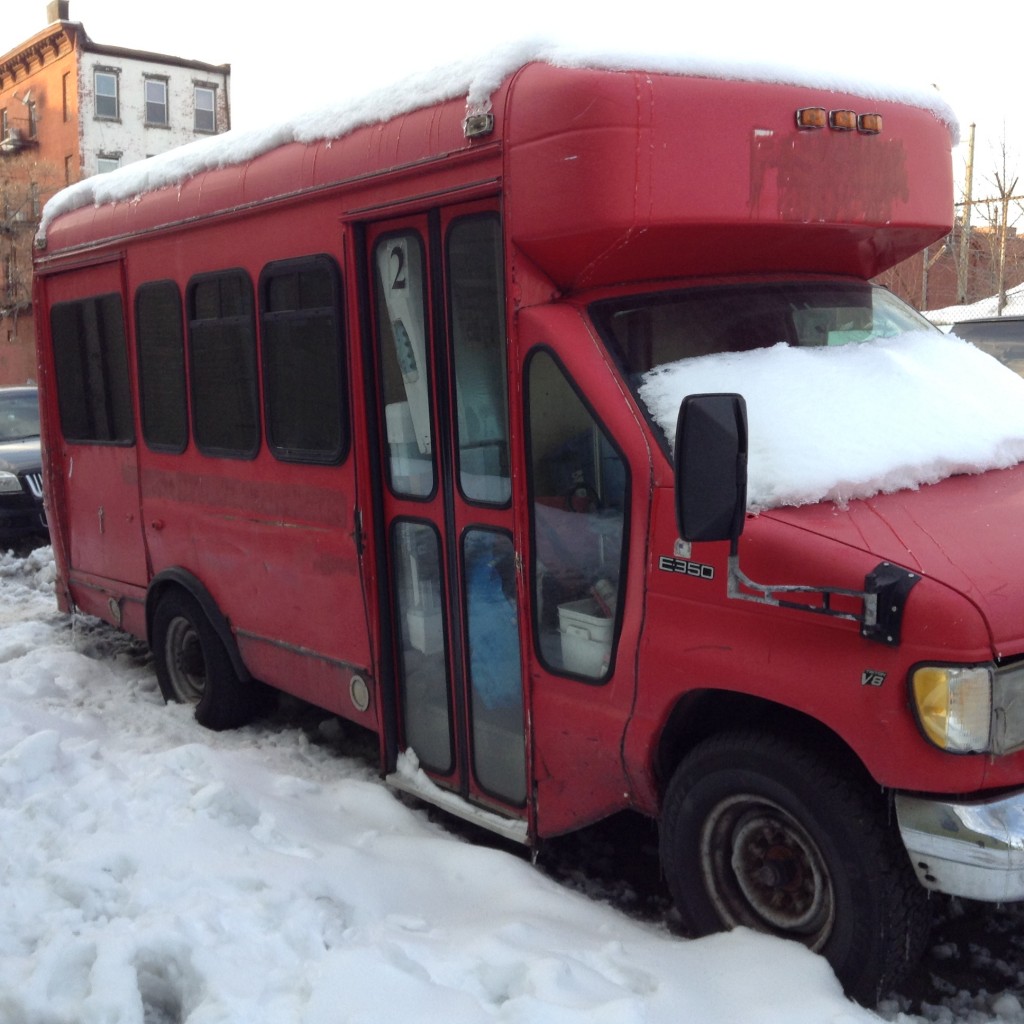 Over many lifetimes Ruffy has seen it all. Comfy and capacious, Ruffy is the neighborhood historian and adoptive father to the generations of kids who’ve come and gone along Union Street. (One of the kids did his portrait, though he misspelled Pops.) 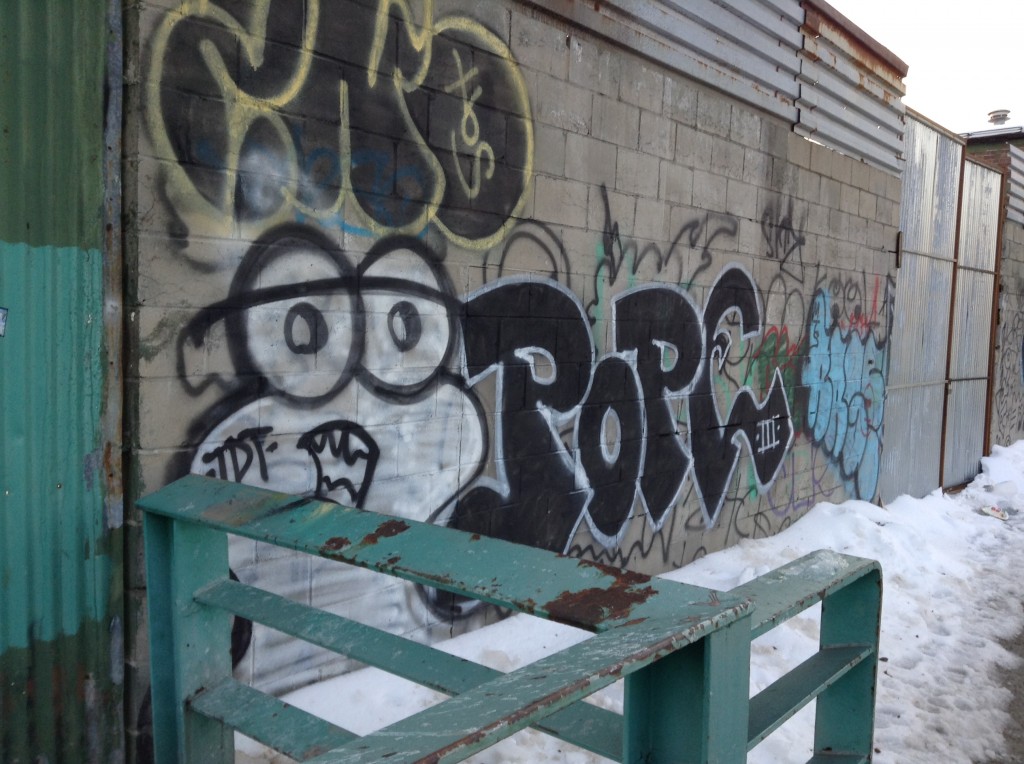 Despite a tendency toward hoarding, which is not up for discussion, Ruffy is usually the easiest to talk to. But not today. It seems Ruffy overdid it last night and was too wasted to hide the evidence. 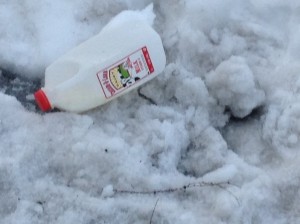 All he could get out was, “Come back tomorrow.” 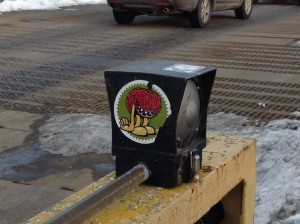 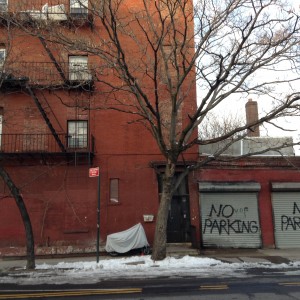 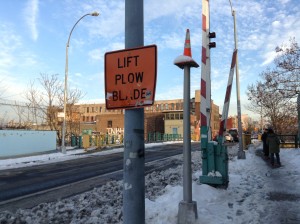 In the continued conversation with my mother about poetry, art and what it means and whether we are worthy of its interpretation, she wrote this poem.  I publish it here, on her birthday. Happy Birthday Mom. Thank you for making me appreciate art and literature – lower case. And for always, most importantly, making me laugh.

who, welcoming us into his gallery

asked, after shaking our hands

We didn’t dare look at each other,

saving the laughter for later.

But then, striding off he said

Melissa Glassman made this collage of the images that she said “popped, popped, into my popping brain” when she visited her block on 2-6-14. 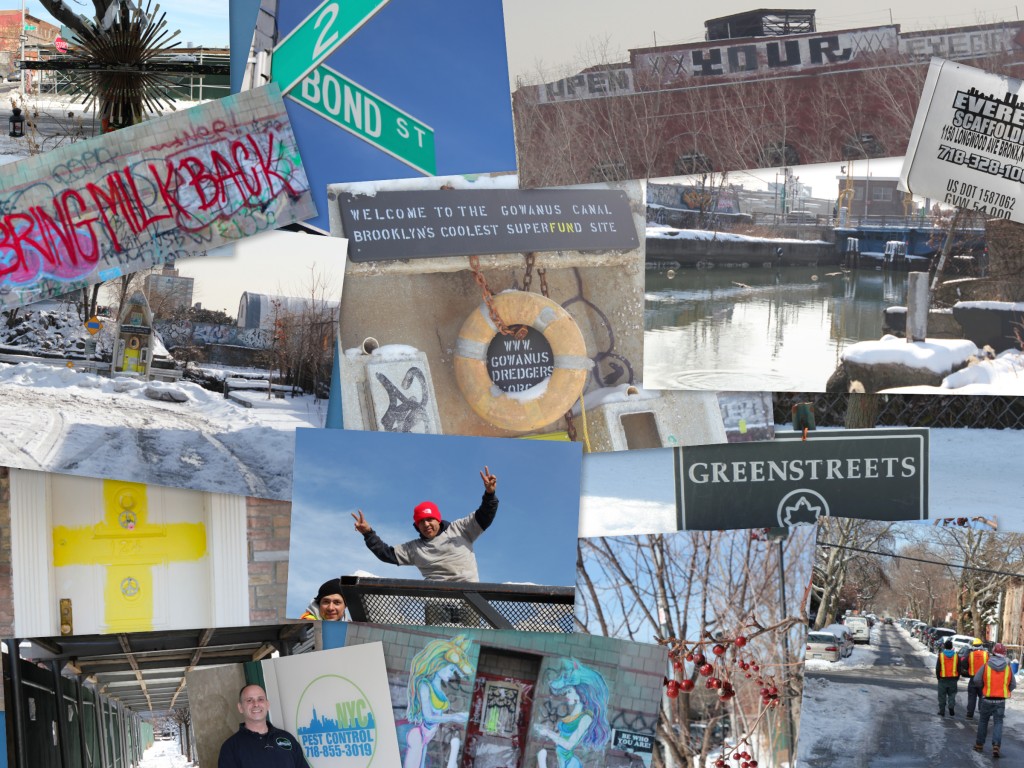 See what else pops in Melissa’s brain.

After a bad case of Gowanus block (self-diagnosed), writer Martha Pickerill has filed her submission:

Can You See Yourself in the Coignet Building?

“Most of the windows have been boarded up, but several are completely open to the elements. The Department of Buildings is investigating the crack and other reports of damage. Currently, the building is on the market for $3 million.” – ny.curbed.com, December 17, 2013 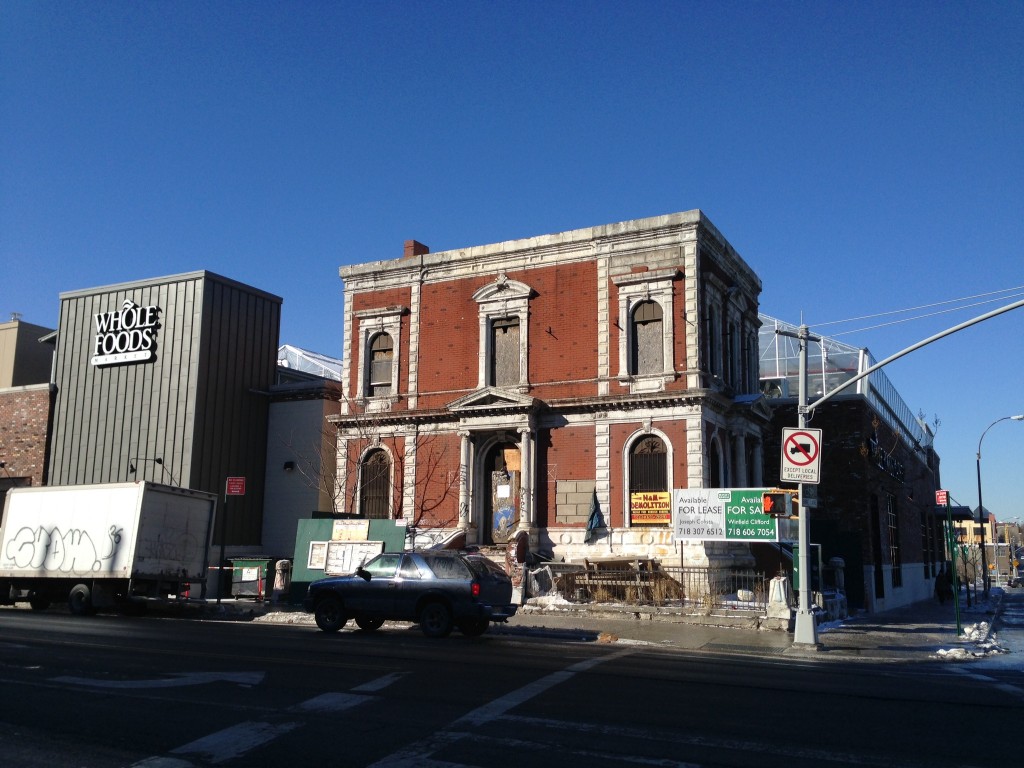 The freestanding grand dame boasts dramatic, horizon-obliterating southern and western views of Whole Foods. Its unique, ornate 19th-century facade is located on the ground nearby. Inside, let your inner interior designer run wild! There’s still time to weigh in on the floor plan, floors, walls, ceilings, staircases, window glass, and other finishes. A handyman special? Oh, no. No handyman has lasted more than 5 minutes after entering the door-free doorway.

The beloved landmarked rarity, built in 1872, may be the first concrete building constructed in New York City. So, history! The Coignet Stone Company came to the U.S. from France to revolutionize construction with a magical combination of sand, water and cement binder. The company filed for bankruptcy in 1873.

Are you ready to savor the easy-going pace of life on the Gowanus Delta in a stately mansion that you pretty much build from the heavily polluted ground up? The location could not be more desirable, just steps from the sun-drenched, mercury-drenched, PCB-drenched and coal tar-drenched 4th Street Beach.

Serious inquiries only. This one won’t last!